Fancy cancels (actually killers) were used from the 1850s through the 1900s to render U.S. postage stamps used on mail invalid for reuse. They were often made by postmasters of third class offices as they had to pay for their own supplies. They used locally obtainable materials such as corks or wood blocks and cut designs into them, or in many instances, bought ready-made devices, commercially produced using vulcanized rubber. Such devices incorporated various geometric designs of crosses or stars, objects such as shields, more elaborate designs like a skull and crossbones or even images of people and animals.

These cancels are found mainly on banknote issues of the U.S. up until approximately 1900 even though the U.S. post office department issued regulations on the standardization of cancellations in 1890 which should have eliminated use of such devices. There are also later examples of commercially produced fancy cancels from the 1920s and 1930s and the U.S. was not the only country to use fancy cancels as Canada and other British Colonies used this type of killer as well.

The black ink normally used with metal devices clogged the commercial vulcanized rubber devices quickly. As a result, manufacturers formulated inks which could be used with them and not clog the device. The formulated inks were not as dark and other colors such as purple or violet were popular even though postal guidelines specified black.

Our interest lies in one cancel design with the spiral image of an ammonite worked into the center of an 8 petaled flower. One story I’ve heard on the origin of the design is that it was used in those cities and towns where ammonite fossils had been found. In the case of at least one city, it’s plausible to think this theory may have originated there, although a bit stretched when one considers the other cities where the design was used. 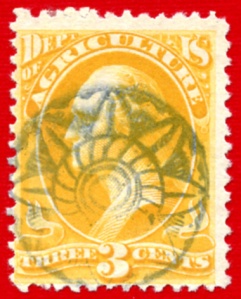 Although the cancel appears on many U.S. banknote issues of the period, the more interesting and scarcer examples of use appear on U.S. official stamps of the various departments of the federal government. These governmental departments had field offices which used official stamps to pay the postage fees and sent their mail through the normal local post office channels. For instance, in the case of the Department of Agriculture, pre-stamped return envelopes were provided to farmers so they might report issues concerning seed orders and other agricultural issues. Although covers bearing the design exist where the city of use can be verified, no cover has been reported on official mail bearing this design.

Note: the example on the 2 cent Interior stamp above appears as a negative impression. This is likely the result of over-inking the device and then using it multiple times before re-inking. The ink in the recessed areas would make the impression rather than ink from the raised design as would be normally expected.

Postage stamp issues the cancel design is known used on:

Colors the cancel design is known in:

Cities the cancel design is recorded from: