Not only postage due stamps can be used to pay a postage due fee. Regular and commemorative U.S. postage stamps are also ocassionally found paying the missing postage and are nice items in and of themselves for the thematic collector When combined with other factors, they become even more interesting. 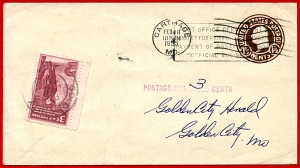 This cover from Carthage to Golden City, Missouri is dated 18 February, 1955. The envelope has a 1.5 cent imprinted indicia (postal stationery) with an overprinted penalty clause for official business. This was done by the Post Office Department and the envelopes could only be used by them. Legally, the person using this cover to avoid postage could be fined $200.00. Fortunately for the sender (no sender’s address is on the rear), the fine was ignored and a 3¢ postage due fee assessed instead using a single copy of the 150th Anniversary of the Pennsylvania Academy of Fine Arts (Philadelphia) commemorative issue depicting Charles Wilson Peale (1741-1827 – painter and naturalist) and a mammoth leg bone in the lower right corner.