The term ‘Perfin’ is a contraction of the words “perforated initials”. That’s a bit odd as it really doesn’t explain much about what that has to do with postage stamps. The official collector’s society for these types of stamps is The Perfins Club. Their definition is a simple one and much better stated than I can!

Perfins are stamps that have been perforated with designs, initials, or numerals by private business and governmental agencies to discourage theft and misuse.

The Sinclair (Oil) Refining Company also used perfins on its mail for exactly this purpose. The illustration below, of the holes in the stamp forming letters, is representative of the recorded hole pattern used by the company. 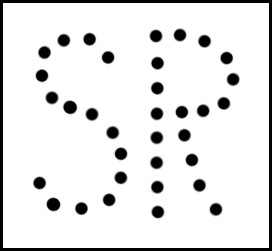 The following cover is an example of that use and it was mailed at the rate of 2 cents for domestic first class mail using a company perfin. Although the corner card indicates a Chicago address, the machine cancellation device indicates the letter was mailed from Grand Central (station postal) Annex 3 in New York on 19 February, 1932.

As it’s addressed to a Mrs. J.S. Fredrickson, I assume it was most likely a note home to Mr. Fredrickson’s spouse while he was in New York. As the content is no longer with the cover, my suspicion is that this is a private use of company assets (envelope and stamp) to a family member and not an authorized company business communication. If so, it’s a prime example of what the company was attempting to avoid.