Many organizations utilize illustrations on their mail to bring extra attention to their organization. Some are simple and others elaborate but they are all eye-catching advertising for their respective group. Without these types of corner cards, it would be difficult for most people to identify the organization only by the serial number of the postage meter. Until the recently introduced Illustrated Mail Division which includes corner cards, exhibitors had a difficult time justifying the inclusion of such covers in their exhibits even though they were examples of postal history of these entities. It was a development long needed to expand the horizon of postal history in general. The illustration and return address typically are printed in the same color and at the same time making them one unit.

Position of the Continents before Continental Drift

Service cover of the Furman University Department of Geology, Greenville, South Carolina to Columbus, Ohio dated September 20, 1977. The university leased Pitney Bowes meter machine serial number 631982 and this cover was sent via first class mail at the then rate of 13 cents.

Trek for Survival Illustrated in the CSEM Corner card

Service cover of the Center for the Study of Early Man, Orono, Maine to A.P.O. N.Y. 09333 (Coleman Barracks, Sandhofen, Germany) dated December 16, 1986. The organization leased Pitney Bowes meter machine serial number 6012167 and this cover was sent via pre-sorted first class mail at the then rate of 18 cents. 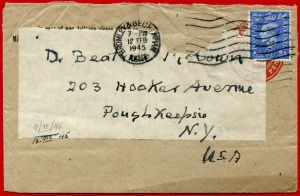