It’s interesting how mistakes are often as strange as prehistoric life itself. Fossil remains of giant salamander Andrias scheuchzeri were found by Swiss naturalist Johann Jakob Scheuchzer (1672-1733) and the interpretation was that they were of a human who had drowned in the Great Flood of the bible. (One guy who really missed the boat!) He named the specimen Homo diluvii testis. If one looks at Scheuchzer’s illustration, you can see how this mistake might have been made by naturalists who were only beginning to understand the origins and progression of life forms with the implements and scientific instruments of the day.

The cover below uses four copies of the 40+10 centimes value and a single copy of the 30+10 centimes value from the 1959 Swiss Pro Patria issue (the 10 centime surcharge of each stamp went to charity). This stamp combination paid the airmail rate of 1 Franc 40 centimes (50c for the first 20 grams plus 3 x 30c for an additional 60 grams) from Zürich (Hottingen), Switzerland (Oct 19) to the Los Altos, CA as well as the registration fee (50c) shown by the ‘R’ label attached with tracking number 069. The letter may have contained something of some small value as it also cleared customs inspection without charges or penalty, indicated by the San Francisco #32 US Customs Inspector marking (Nov. 4). 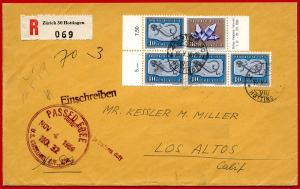 Multiple Use of Swiss Issue

The father of paleontology, French naturalist Georges Cuvier, corrected the misclassification of the fossil remains after studying the illustrations by Scheuchzer and this proposed ancestor to our history never came to be.